Is 'Giving A Fighter Every Opportunity' To Fight Back Even Legal?

Share All sharing options for: Is 'Giving A Fighter Every Opportunity' To Fight Back Even Legal? 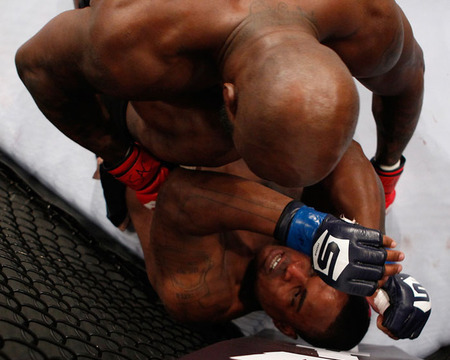 After Saturday's Strikeforce: Rockhold vs. Jardine, both Muhammed Lawal and Trevor Smith publicly made their displeasure known about the refereeing abilities of Kim Winslow. Fighters complaining about referees is nothing new, but what's different is that while Smith might be upset he lost, Lawal was unhappy with how the referee let him win.

Long story short, Lawal thought Winslow let Lorenz Larkin take too many unanswered punches. Looking back at the footage, he's clearly correct. Lawal even asked referee Winslow why she let the fight go as long as she did given her vantage point to see the action was clear and unobstructed. Her response? Lawal describes their short conversation as follows: "She said 'well, I wanted to give him every opportunity to bounce back. If it takes for him to be asleep, that's what it is...She's never taken a punch before, so it's easy for her to say that."

Lawal couldn't possibly be more correct. The most predominant issue with MMA referees are their lack of awareness for rules or improper enforcement of said rules. Winslow case seems to be neither making it more problematic.

The central issue with Winslow's view is there's no command or requirement in the Unified Rules of Mixed Martial Arts that declares a referee's responsibility is to evaluate whether a fight should or should not be stopped based on if the losing fighter has been awarded every conceivable chance to mount a comeback. It's flat not there. It doesn't exist and yet appears to be a popular maxim among referees. Why? It sounds charitable, right?

The problem is since it doesn't legally exist, there are no guidelines explaining how to properly enforce it. That's also precisely where charity turns into savagery. The idea of giving a fighter every opportunity sounds like justice, but it can result in a referee who will be too accommodating of punishment.

What do the Unified Rules actually mention? Not much. Referees' only guidelines appear to be "13:46-24A.12 Stopping a contest: The referee and ringside physician are the sole arbiters of a bout and are the only individuals authorized to enter the fighting area at any time during competition and authorized to stop a contest."

However, we have a sense of what counts for defending yourself: Intelligent defense. That's also a problematic term, but it has at least some measure of explanation: "An intelligent defense minimizes the potential for damage while providing the opportunity for taking back the offense."

No matter how sticky the above definition, there is no serious way to describe what Larkin was doing when being rough up by Lawal as approximating what 'intelligent defense' sets out to be. What kept Larkin in the fight was an invented guideline predicated on detectable consciousness.

It's all right to give fighters every opportunity to win within the parameters 'intelligent defense' - namely, that they're taking steps to minimize damage. That alone won't solve the issues of dubious stoppages, but if a fighter's only sin is to remain conscious enough, do the really charitable thing: worry less about their chances and more about their health.