Previewing Strikeforce: Rockhold Vs. Jardine On The Round-Up

Share All sharing options for: Previewing Strikeforce: Rockhold Vs. Jardine On The Round-Up

Today we go over all the last minute items of Strikeforce: Rockhold vs. Jardine, from previews and interviews, to predictions and statistical analysis. And, of course, we'll get to the latest chapter of B.J. Penn's out-of-nowhere beef with the Cesar Gracie camp. But first...

- Dallas Winston comes back at you with another pair of the best previews in MMA. Today's version: Robbie Lawler vs. Adlan Amagov and Muhammed "King Mo" Lawal vs. Lorenz Larkin.

- MMA Fighting's Ben Fowlkes dropped by with a fantastic piece on the evolution of Muhammed Lawal.

- Like any fighter, Luke Rockhold just wants to be the best in the world. If you're in the middleweight division, that means just one thing. Listen to the champ: "They say Anderson Silva's only got four fights left; I want to be one of those four fights."

- The Bloody Elbow staff gets together to make their predictions for Strikeforce: Rockhold vs. Jardine.

- Not enough for you? Then check out MMA Mania's own Jesse Holland for his picks and analysis.

- Moving away from Strikeforce, Georges St. Pierre took a break from rehab to escort Gina Carano to the premiere of Haywire. Find the rest of the pictures here. 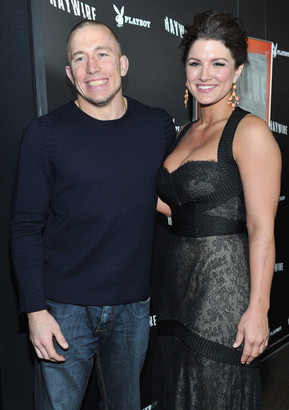 - In a surprise decision, Floyd Mayweather's jail sentence was delayed to June 1st, meaning there's still an outside shot that "Money" could be meeting Manny Pacquiao on May 5, 2012.

- B.J. Penn's bizarre saga with Nick Diaz and the Cesar Gracie camp continues. On Friday Gracie issued a response to Penn's Twitter barbs, and it didn't take long for the Hawaiian to come right back.

@bjpenndotcom
BJ PENN@CesarGracieBJJ Excuses?? The whole world knows I lost the fight including myself. I’m tired of you talking down to me Cesar, I hope you're in training camp right now because the next time I see you, you better not be "scared homie!"
Jan 06 via TwitLonger BetaFavoriteRetweetReply

- If this kind of thing interests you, MTV's released the season premiere of their vaguely MMA-themed series Caged. Remember, this is MTV, so expect all the manufactured teen drama you could handle.

- With the UFC-Spike TV relationship done, and Bellator waiting in the wings for 2013, could the network be looking to branch out into boxing? Apparently so, as officials have reportedly turned to boxing promoter Bob Arum and Top Rank Inc.

- We'll sign off with this Brazilian footage of Gray Maynard training with Jose Aldo at Nova Uniao. No English subtitles, but interesting nonetheless.