Share All sharing options for: Cesar Gracie Fires Back At B.J. Penn 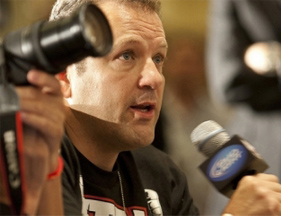 In case you hadn't heard, Penn took a break from retirement to send out this inexplicable rant from his official Twitter account on Thursday.

@bjpenndotcom
BJ PENNhttp://t.co/QfA3igOI - @nickdiaz209 Look how much bigger you are in this pic..I thought you were gonna scrap from the beginning homie? What was that coward fence holding strategy to tire out the smaller man? Street fighter my ass! I made you fight like glass jaw @jonfitchdotnet poser! I'll be ready for that weak bs next time we fight!

Because of the flippant insults and how out-of-nowhere the tweet arrived, many initially thought Penn's account had been hacked. Though that notion was quickly put to rest when Pedro Carrasco, the news director of BJPenn.com, confirmed the message on The Underground.

There is a reason why he posted it, He is fired up because now that the holidays are over and a lot of his post-fight distractions are behind him he has nothing to do but think about things and he is not happy with the way he performed in his last several fights.

I am not here to make excuses for him, but I am pretty sure people, at least with some sense of intelligence, can identify that the BJ that fought Edgar, Fitch and Diaz was not the same Penn that fought the Diego's and Florians of the world

Things changed, but as it sits right now, he is back. That killer mentality and fire is back and it's been brewing for a while now and today's tweet is a result of it just boiling over!

Expect more from Penn to come for sure!

Of course, if you're going to come at the king, you best not miss. Cesar Gracie and the Diaz brothers are never ones to shy away from telling it like it is, and after the borderline felony assault Nick put on the Hawaiian, it was only inevitable that Gracie would fire right back. (via GracieFighter.com)

BJ Penn has apparently not come to terms with the beating he received at the hands of Nick Diaz.
...

At some point it is up to those around you to protect you from yourself. To take you aside and let you know you are wrong and help save you from your folly. Unfortunately for Penn he is surrounded by "Yes Men" that are unwilling to do that. The outcome will be predictable, resulting in a fighter that will never push himself to the fullest and will always have excuses for his losses.