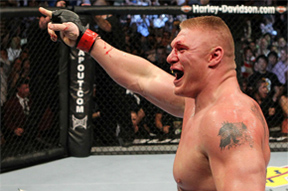 The early numbers for UFC 141 are in, and Brock Lesnar appears to have cemented his legacy as MMA's unquestioned pay-per-view king.

All last week the mixed martial arts community was buzzing to see the reception that would greet UFC 141. Could Lesnar's absurd drawing power overcome a publicly overlooked shift to Friday night? The Wrestling Observer's Dave Meltzer has the goods (subscription required).

Because of the holiday, our early PPV numbers are somewhat sketchy but early industry estimates have ranged between 750,000 and 810,000 North American buys, which would be slightly higher than most expectations. The show probably would have hit the 1 million mark if it was on New Year's Eve. The original plan was to do a New Year's Eve show from Abu Dhabi, but when that fell through, they booked the MGM Grand. Because the strip in Las Vegas is shut down from 6 p.m. to 2 a.m. on New Year's Eve, it really would be impossible to run a show like they do in Las Vegas on that night. It would be either the second or third biggest number in UFC history drawn by a non-title match. Rashad Evans vs. Quinton Jackson holds the record at around 1 million, Ken Shamrock vs. Tito Ortiz II was second at 775,000, and please don't insult anyone's intelligence by claiming the Tim Sylvia vs. Andrei Arlovski heavyweight title match on that show was really the main event.

The show appears to have done the most buys in the U.S. for any PPV show since Lesnar's prior fight with Cain Velasquez, and it may have done the biggest number overall since that time, although the Georges St. Pierre fights with Josh Koscheck and Jake Shields may slip ahead overall because of the strong Canadian numbers. Sketchy trending information indicates it appears to have set the company record for any show in Australia.