Share All sharing options for: Strikeforce: Luke Rockhold 'Dumbfounded' When He Heard Of Jardine's Title Shot 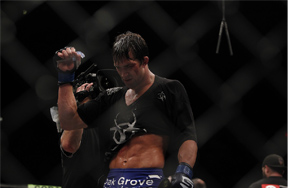 When Strikeforce announced Luke Rockhold would defend his 185-pound title against former UFC heavyweight/light heavyweight Keith Jardine, a loser of six of his last ten bouts, public consensus seemed to view the decision as head-scratching to say the least.

Apparently Rockhold was just as confused as the rest of us.

It's a rare -- and often dangerous -- slight when fighters start to doubt the merits of their opponent, but to his credit, Rockhold answered as honestly as he could when MMA Fighting's Ariel Helwani asked for his initial reaction regarding Jardine's title shot.

I was a little dumbfounded by that one. It's definitely not the first opponent I had in mind. Tim Kennedy got injured, and I guess they didn't want (Ronaldo) "Jacare" (Souza), but the more I thought about it, the more I kind of understood it from a promotional standpoint.

(But he wasn't on my radar) at all. No. It was the last thing I would have thought. I was thinking maybe a rematch with "Jacare." I even kind of asked for that. The first thing I thought when I heard Kennedy was injured, I was like let's just do a rematch, you know? Because I'd love to shut up some people that somehow believe that "Jacare" won that fight.

Photo by Esther Lin via MMAFighting.com