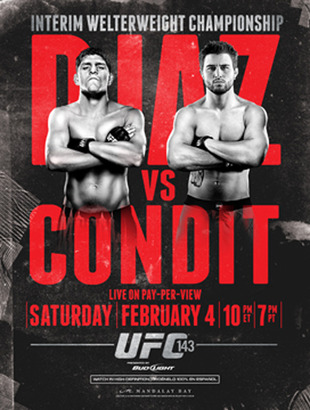 The UFC has released a new poster for UFC 143: Diaz vs. Condit which will be held in Las Vegas, Nevada on February 4.

The card will be headlined by a fight for the interim welterweight title between Nick Diaz and Carlos Condit. Champion Georges St. Pierre is out recovering from surgery to repair a torn ACL. The card will also feature heavyweights Roy Nelson vs. Fabricio Werdum, welterweights Josh Koscheck vs. Mike Pierce, bantamweights Renan Barao vs. Scott Jorgensen, and middleweights Ed Herman vs. Clifford Starks.

Diaz and Condit should be a great bout. Diaz, the former Strikeforce champion just took a dominant decision win over B.J. Penn in his return to the UFC. Condit is on a hot streak with three straight wins by KO or TKO over Dong Hyun Kim, Dan Hardy and Rory MacDonald.

Diaz had been set to fight GSP at UFC 137 but was pulled from the title fight as a punishment for missing a pair of press conferences. Condit was given the title shot in his stead but when GSP pulled out with an injury (not the torn ACL), he didn't get to fight at all.

Diaz was then promised GSP at UFC 143 but the champ's ACL tear prevented that from happening and now he'll fight Condit.