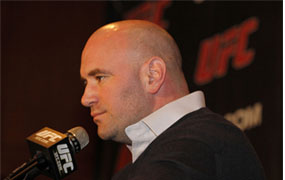 Hacker extraordinaire S3rver.exe made quite a commotion last week amid Dana White's online war with Anonymous.

Following the release of White's entire catalog of personal information -- including his social security number, phone numbers, and criminal record -- the unidentified hacktivist tipped the scales even farther, posting a live video feed allowing viewers to watch as he defaced UFC.com and UFC.tv.

After all that, would you believe me if I told you S3rver.exe was only a 13-year-old boy from Australia?

That's right. One of White's primary "terrorists" can't even apply for a driver's license.

Tech site Softpedia broke the story in an interview with the youngster over the weekend:

Softpedia: When and why did you start hacking?

S3rver.exe: I started hacking when I was 11. Botnets and Rats inspired me and then a friend introduced me to SQL injection and other hacking stuff.

Basically, I started hacking because I saw many videos and news around the world about hacking and then I also wanted to learn. I made heaps of Internet friends and they taught me some tricks.

And I guess hacking is my type because I really like computers and I want to get a job in computing.

Softpedia: What kind of hacker do you consider yourself to be? Have you always been what you are now?

S3rver.exe: I consider myself as a Grey Hat because I like helping out people who are in trouble. I really like Botnets, but I am not that kind of guy who steals money from credit cards and stuff.

Yeah, I was always like this. My skills got better and better this year. At first I didn't really know how to hack but tutorials and videos helped me a lot.

Mainly, I am grey hat hacker because I like helping out people, so if they have trouble with anything I can help them, and they can also improve their skills by that.

Softpedia: How many sites would you say you've hacked so far and how many have you DDOS'ed?

S3rver.exe: I have hacked about 150 websites. 81 of the hacked websites belong to the Brazilian and the US government.

I don't like DDOS'ing that much, but this is the part where I use my botnet. I took down about 120 websites including Fbi.gov and Mastercard.

I have DDOS'ed many websites with Anonymous, but people were helping DDOS the big sites.

Softpedia: Are you part of Anonymous or are you an independent hacker that supports the cause?

S3rver.exe: Yeah, I am part of Anonymous. I have taken part in a lot of operations with Anonymous.

I first heard about Anonymous when the PSN was hacked and my friend told me that there is a video on YouTube on how to join them. Then I saw their IRC and there was a channel where I asked people if they can tell me how I can help.

After I learned how, I helped DDOS websites, and then I learned SQL injection and defacing.

S3rver.exe: I have breached the Administrator of usa.gov yesterday. That was fun. I went through the directories and stuff. Me and my friend Sterlok breached the security.

Then I did a live deface on UFC.com and UFC.tv. The live deface was on Tinychat. I was sharing my screen and people were watching me deface.

Now I have XSS'ed OPOA, which is the Oakland Police website. I am going to release their stuff soon.

So those were really important to me.

Softpedia: Do you ever worry about the consequences of your hacking jobs? Most gray hats say they're not worried because they don't think they're doing anything wrong, or they're not causing too much damage.

I am not that worried :)

I always have a reason to hack a website, I am not like just going on a random deface rampage.