VIDEO: Lavar Johnson Uppercuts His Way Into 'Knockout Of The Night' At UFC On Fox 2

Share All sharing options for: VIDEO: Lavar Johnson Uppercuts His Way Into 'Knockout Of The Night' At UFC On Fox 2 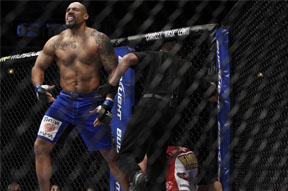 Taking a page out of Bellator's book, UFC officials have begun posting clips of the most noteworthy finishes from their Fox broadcasts, and what better way to kick things off than Lavar Johnson's bonus-winning knockout of Joey Beltran at UFC on Fox 2?

Video of the violence can be seen after the jump.

ROUND 1 - Both fighters open orthodox with Beltran being stalked. Johnson nails Beltran with a body shot and drops him, but Beltran stands. The two fighters clinch against the fence. They briefly separate, but Beltran forces the clinch again. Now they're backing to squaring off and Beltran eats a huge outside leg kick plus a series of jabs. Another leg kick from Johnson. Beltran eats a hard body shots and now he's beginning to land at will. Beltran fires back with a body shot or two of his own, but he's being controlled here. Beltran is now doing the stalking and charging forward with punches. Johnson lands a monster uppercut and that's the beginning of the end. A few more hard uppercuts and right hands from Johnson and Beltran crumbles face first.

Photo by Esther Lin via MMAFighting.com.