PHOTO: Nik Lentz's Eye Is A Show At UFC On Fox

Share All sharing options for: PHOTO: Nik Lentz's Eye Is A Show At UFC On Fox

Nik Lentz was in the middle of a thrilling back and forth with Evan Dunham before the ringside physician had to stop the bout due to a nasty cut and swollen left eye. Commentator Joe Rogan noted that sort of immediate swelling could be due to a broken orbital (if true, that would be his second in the UFC). Whether or not that's true, it was gruesome.

Photo of the eye and fight breakdown after the jump. 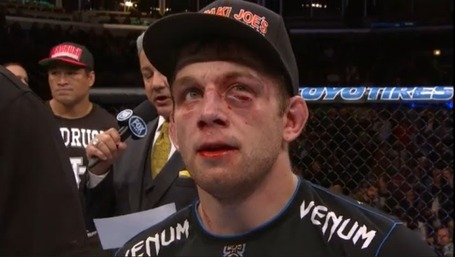 Here's how the fight went:

ROUND 1 - Dunham opens southpaw and Lentz is orthodox. Nice right hook from Dunham as Lentz charges in. Lentz gets a front head lock off a failed takedown, but they both separate. Lentz lands his own right hook. Lentz charging forward and lands a few punches before getting a double leg off the fence. Dunham uses deep half hook to stand. Hard body kick now by Lentz as he is the clear aggressor. Lentz shoots for a takedown and almost gets guillotined, but avoids it as Dunham stands. Left hand lead now from Dunham plus a huge scoop double puts Lentz on his back.

MMA Nation scores this round 10-9 Lentz.

ROUND 2 - Dunham charges forward and gets a double leg scoop. Lentz working off of his back. Dunham uses head and hip control to pass to side. Lentz nearly sweeps Dunham before Dunham keeps control. Lentz goes base down and Dunham tried to take his back, but Lentz rolled to his back. Lentz stands and lands hard punches in the clinch. Lentz lands a nice leg kick, but eats a left hand. Now Lentz doing the stalking and charges in for a double. He doesn't get it and both fighters and landing hard punches in the pocket on each other. Lentz tries to run down a double and Dunham ends up on top after stopping it. Dunham tries a guillotine, but can't get it and fires elbows to the face on Lentz after letting it go. Lentz taking a hard shot as he stands and fails on a throw. Lentz still charging forward but can't get takedown.