Rashad Evans: 'Go Ahead And Try To Wrestle Me For 25 Minutes'

Share All sharing options for: Rashad Evans: 'Go Ahead And Try To Wrestle Me For 25 Minutes' 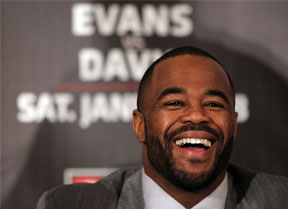 If you could get past the Chael P. Sonnen Show at Thursday's UFC on Fox 2 press conference, you likely witnessed Rashad Evans and Phil Davis going toe-to-toe in another explosive round of trash-talk. Only this time the subject was not their upcoming network clash, but instead, Davis' collegiate wrestling credentials.

Afterward a fired-up "Suga" took to his video blog, challenging Davis to put his money where his mouth is.

"I'm pumped up for this fight, because I think Phil's drinking the Kool-Aid, man. He's sipping the Kool-Aid a little hard, you know. I mean, he's getting caught up in the whole ‘oh this is wrestling,' and stuff like that, and he's a better wrestler. I mean, go ahead and try to wrestle me for 25 minutes. You know how tired you'd be if you try to wrestle me for 25 minutes. I mean, come on, that's ridiculous. You can't wrestle for seven minutes or six minutes straight without getting tired. 25 minutes? (Shakes head.) Ridiculous. But if he tries to wrestle, he's going to be done.