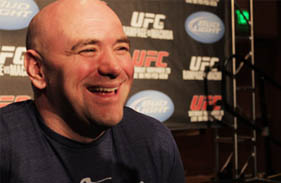 The UFC's dispute with the internet hit a new climax on Thursday, as UFC President Dana White challenged hackers to again pilfer the UFC's official website.

In response to the affront, the usual temperamental White was unusually nonchalant, declaring on Twitter, "why would I give a (expletive)? I'm in the fight biz not web biz!"

The UFC eventually defused the ruckus, but now White seems to have taken things to another level, much to the horror of anyone whose credit card information is stuck within Zuffa's vault.

Is SOPA the perfect bill? No, it's not.

The only thing that we're focused on is piracy. Piracy is stealing. You walk into a store and you steal a (freaking) gold watch, it's the same as stealing a pay-per-view.

I don't care what your twisted, demented idea of stealing is. These kids that grew upon the Internet have never had to pay for anything, so they think you shouldn't have to.

Keep hacking our site. Do it again. Do it tonight.

You know what's happening is? These guys look like terrorists now, and a bill that was about to die is about to come back. ...

You want to keep hacking our site, go for it. Watch what happens. You're hurting yourself.

You'll be very surprised what's happened over the last six days over this whole thing. You go in and you start hacking big companies' websites, big government websites. ... Politicians were terrified of the Internet -- now you're making them mad.