UFC On FX: Jorge Rivera Will Retire After Bout With Eric Schafer

Share All sharing options for: UFC On FX: Jorge Rivera Will Retire After Bout With Eric Schafer 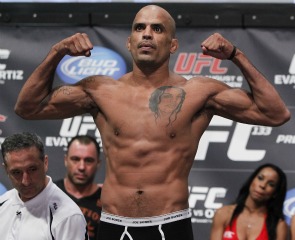 Veteran UFC middleweight Jorge Rivera will retire after tonight's UFC on FX bout with Eric Schafer. UFC commentator Jay Glazer announced the news at the beginning of Fuel TV's broadcast of the UFC on FX preliminaries.

The 39-year-old Rivera (18-9, 7-7 UFC) has been fighting in the UFC on-and-off since 2004. He's 5-4 in his current run which began in 2006 with Rivera's stint on the "come back" season of The Ultimate Fighter. That season was the only one to feature UFC veterans to get a second chance at fighting for the promotion.

Rivera has losses to UFC champs Anderson Silva and Rich Franklin, neither in title fights. Rivera's biggest wins probably came over Nate Quarry, Kendall Grove and Dennis Hallman. Originally a kickboxer, Rivera earned the favor of fans with his brawling style that saw him notch 13 KO/TKO wins and suffer 5 himself.

Rivera owns an MMA gym in Massachusetts and is the father of four children.