Frankie Edgar scares tow truck drivers, Mark Munoz faces the knife, Tito Ortiz talks Muhammad Ali, Chael does what Chael does, and Bas Rutten is the breaker of bodies on today's edition of The Round-Up.

Share All sharing options for: Frankie Edgar Gets Pranked, Bas Rutten Busts Spleens On The Round-Up

This morning we'll amble through yesterday's highlights, from Frankie Edgar's unwanted surprise and Tito evoking Muhammad Ali comparisons, to Chael being Chael and Australia's peculiar vendetta against the UFC. But first let's start out with a quick preview of tonight's UFC on FX action.

- Take a sneak peek at the overlooked heavyweight battle between Pat Barry and Christian Morecraft.

- Barry is a hell of an entertainer, but could he be fighting for his job tonight?

- The Bloody Elbow and MMA Mania staff lay out their predictions for all the big fights.

- Frankie Edgar's coach, Ricardo Almeida, played a prank on the champ earlier this week with a little assist from Yahoo Sports. 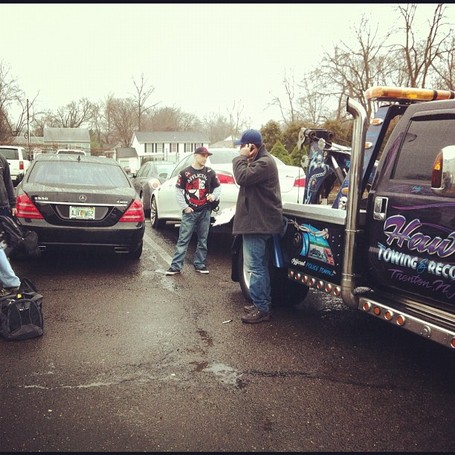 - Melvin Guillard's weakness is grappling. Jim Miller is fearless on the mat. What does it all mean?

- You may not know the story of Joseph Lozito, the subway hero of New York, but all you need to know is he was able to end a 28-hour stabbing spree because he was a lifelong fan of mixed marital arts. Now watch this video. (via KahL-One/Vimeo)

- If Pat Barry is looking to avoid a third straight loss, it'd be wise to display some of the "tremendous growth" he has supposedly undergone in his ground game.

- Words from Tito Ortiz: "If you just want to be a fighter, then you will be forgotten. But if you want to be an entertainer, then you'll always be remembered, like Muhammad Ali... and hopefully like Tito Ortiz."

- A former UFC fighter was sentenced to one-to-four years in prison on Thursday after pleading guilty to sexual assault charges.

- Chael Sonnen may have less then two weeks to promote his new fight with Michael Bisping, but the people's champion hasn't let us down yet.

@sonnench
chael sonnen Spent months training to fight Munoz and now I have to fight a guy who sounds like "PIP" from South Park.
Jan 19 via web Favorite Retweet Reply

- Bizarre problem: the UFC wants to hold an event in Melbourne, Australia but can't because it's apparently illegal to hold MMA events in a cage rather than a ring. (Wait... what?)

- Former Strikeforce fighter Sergei Kharitonov is willing to sign with the UFC, but only if the price is right.

- Mark Munoz is officially back on the comeback trail after having his push for the title derailed by injury. 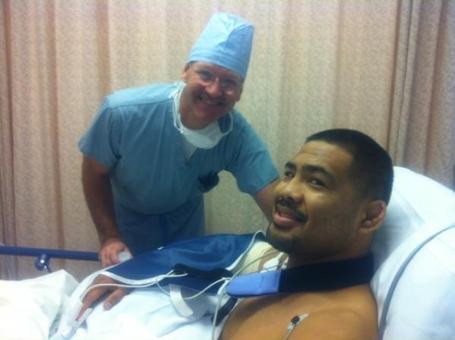 @mark_munoz
Mark Muñoz Took this out of my elbow! 24 bone spurs. http://t.co/kRCuReYG
Jan 19 via Photos on iOS Favorite Retweet Reply 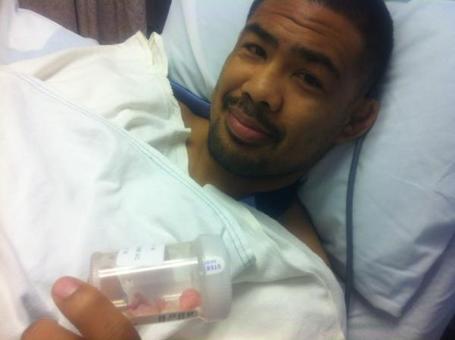 - Munoz is usually one of the nicest, most upbeat people in this sport, but even he had to admit that the late injury was "a hard pill to swallow."

- With Munoz out and Bisping in against Sonnen, poor old Demian Maia briefly appeared to be the odd man out. Of course, fans immediately flashed up the tree stump signal, but Maia had no interest in fighting Paul Harris the Legbreaker anytime soon. Can you blame him?

- Finally, we'll leave you with another oldie, but goodie. Nothing to see here, just Bas Rutten busting open a human spleen.

Wrapping Up UFC 142 On The Round-Up