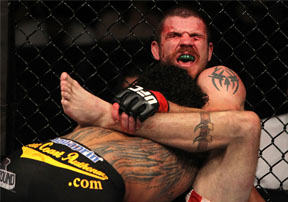 If Jim Miller didn't seem himself during his last time out, it's probably because he wasn't.

Unbeknownst to the 28-year-old, Mller's body was plummeting into crisis mode while Ben Henderson was busy handing him his first loss in eight fights.

Never one to make excuses, Miller finally revealed the news to MMA Fighting, explaining five months after the fact that he was not only battling Henderson on fight night, but also a kidney infection and mononucleosis.

"It really hit me a couple hours after the fight," Miller said. "I woke up in the middle of the night and had this weird pain my lower back. It just wouldn't go away. It was something I never felt before and really hope to never feel again, to be perfectly honest. I got home, it was [expletive] traveling, bouncing on the plane and stuff like that was not comfortable. It was actually the first time that I lost weight after a fight because I didn't have an appetite or stuff like that. It was pretty miserable."

"I had a bad night. I knew something was wrong and I didn't adapt to the situation. He fought a great fight, and I just wasn't capable to keep up that night," Miller said.

"I really didn't know that I was sick. I knew something was wrong. I was pretty tired in camp and stuff like that, but when I was warming up for the fight, I knew something was off. I was getting winded just doing my warmup round, and then when we were starting to get ready to go out there, I just didn't feel like I had energy. And then stepping into the Octagon, I usually have tons of energy flowing around, bouncing around, and I just didn't feel it. I tried to fight like I normally fight, and I wasn't able to put him away with that style of fighting. I feel like I should have made the correction, fought a little more conservatively, worked for dominant position and then go for the attack and stuff like that instead of throwing everything I had at him."