Share All sharing options for: Demian Maia Didn't Want To Fight Palhares Because 'The Brazilians Shouldn't Face Each Other' 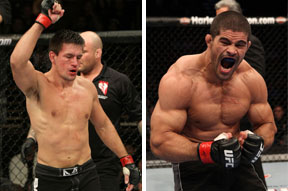 Immediately after Mark Munoz's injury forced Michael Bisping into a bout with Chael Sonnen at UFC on Fox 2, fight fans began to call for Rousimar Palhares to fill the vacant spot opposite Demian Maia.

Fresh off a 63-second win at UFC 142, "Paul Harris" ultimately turned down the opportunity due to fatigue, leading to Chris Weidman getting the nod. As it turns out, that's just fine with Maia.

In the wake of the primetime switch, Maia explained to SporTV why he prefers fighting the American as opposed to his countryman. (via Bloody Elbow)

"It was rumored (a fight with Palhares), but I thought there would not be any possibilities (of it happening), because he just fought, it doesn't make sense for him to throw himself into another fight right now. "Toquinho" trained a few months for this fight. Just because it was fast doesn't mean there were no wear and tears. But I don't even think about that. To be honest, the Brazilian fans should be more worried about seeing us fighting foreigners. There are (only) a few Brazilian fighters in the division and I think that, aside of the title, since it's Anderson who is the champion, the Brazilians should not face each other."