'King Mo' Lawal: I Might Cheat At Video Games, But I Never Cheat At Fighting

Share All sharing options for: 'King Mo' Lawal: I Might Cheat At Video Games, But I Never Cheat At Fighting 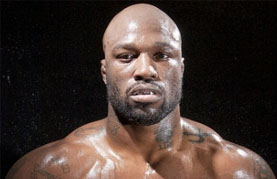 Former Strikeforce light heavyweight champion Muhammed "King Mo" Lawal was just as surprised as the rest of the MMA community when word came out on Tuesday that he tested positive for the banned substance drostanolone.

Lawal now faces a potential fine, one-year suspension, and reversal of his January 7th win over Lorenz Larkin to a "no contest," unless he can submit a successful appeal to the Nevada State Athletic Commission. Though the 31-year-old "King Mo," an avid supporter of Olympic-style drug testing, intends to just that (via ESPN):

"I'm very surprised about this. I am very careful about what I put into my body," Lawal said Tuesday. "I've never tested positive for a performance-enhancing drug. I've gone through, and still welcome, Olympic-style testing.

"I will do whatever is necessary to get to the bottom of this."

"I'm not a cheater," Lawal said. "I might cheat at video games, but I never cheat at fighting."