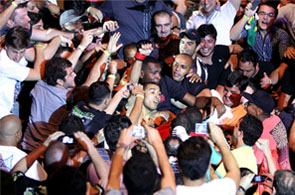 In a night bursting with strange and incredible individual performances, Jose Aldo somehow managed to steal the show last Saturday.

Just moments after barreling a knee straight to Chad Mendes' jaw, the reigning UFC featherweight champion thundered into the stands to rejoice with his countrymen at Rio de Janeiro's HSBC Arena. The ruckus that ensued quickly developed into one of the most iconic scenes in recent UFC history. Hit the jump to see Aldo's celebration.

Though the celebration was memorable, if you missed the knockout, you should do yourself a favor and check it out. Our own Luke Thomas called the action live.

ROUND 1 - Both fighters standing orthodox and Mendes starts off with several inside leg kicks. And now an outside leg kick. Aldo returns the favor and it's hard. Mendes dives on a single and can't get it. Aldo doing all the stalking now. Aldo fires off another hard outside leg kick. Hard uppercut from Aldo and Mendes dives on another single, but can't get it. Mendes grabs another single, but Aldo spins out. Mendes catches a leg kick and as Aldo spins and Mendes takes his back. Mendes still behind tries a lift, but Aldo uses the fence. Mendes still behind Aldo pressing the champion into the fence. Aldo breaks the tightwaist and drives a knee into Mendes' face. Aldo follows up and that's a wrap. Aldo is still the champ.

Jose Aldo defeats Chad Mendes by knockout at 4:59 of round 1.