Jon Jones Struts The Catwalk On The Round-Up

A look ahead to UFC on FX 1, Ronda Rousey burns Cyborg, Rashad Evans heads home, UFC President Dana White fires back at ESPN, and Jon Jones sashays down the runway on today's edition of The Round-Up.

Share All sharing options for: Jon Jones Struts The Catwalk On The Round-Up

- Following Sunday's Outside the Lines report that criticized the UFC pay scale, Dana White & Co. hit back with a vengeance. The Zuffa brass released three separate videos on Monday, including a response in which White refers to ESPN as "dirty liars," as well as the complete, uncut, 43-minute interview with Lorenzo Fertitta.

- Mike Easton gives us a clip of his final strength and conditioning workout before his January 20th bout against Jared Papazian.

- The UFC needed just three hours to sell out it's inaugural trip to Sweden.

- Duane Ludwig and Kamal Shalorus took some time to sign autographs after landing in Nashville for UFC on FX (via @UFC). 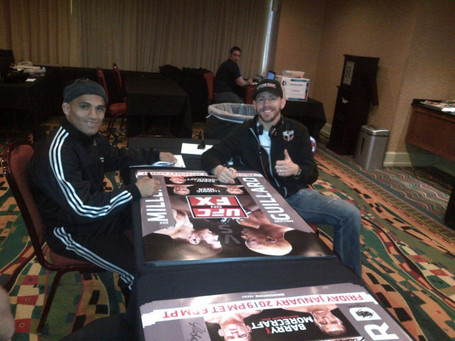 - Ronda Rousey and "Cyborg" Santos got into a rather heated Twitter war on Monday, which of course ended when "Rowdy" unleashed this bombshell: "You don't just have a dick, you are a dick."

- He may not of officially won at UFC 142, but Erick Silva was still in high enough spirits to film this stunt for UFC Brazil.

- As far as I can remember, Rashad Evans hasn't been cheered once in his entire UFC career. So why would January 28th be any different? He'll tell you.

- What do Rashad and Melvin Guillard have in common? Both have officially left Greg Jackson's camp to become a Blackzilian.

- While his fellow fighters packed into Brazil's HBSC Arena on Saturday, Cain Velasquez treated himself to one of the most incredible NFL playoff games in recent memory. (Photos via Felipe Cuevas/Univision.com) 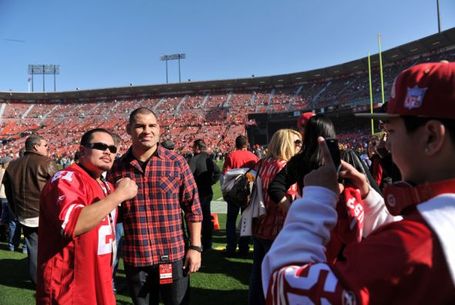 - After Jose Aldo's ridiculous knockout of Chad Mendes, has the featherweight champion cemented his place in the pound-for-pound top-5? The Bloody Elbow crew breaks it down.

- Of course, we'd be remissed if we didn't leave you with Jon Jones' Brazilian runway exploits from last weekend. Check for the champ at 1:33 and again at 8:39. (HT: Cage Potato)

Wrapping Up UFC 142 On The Round-Up