Ramping Up For UFC 142 On The Round-Up

Share All sharing options for: Ramping Up For UFC 142 On The Round-Up

This morning we'll pour over all the last minutes details of UFC 142, from interviews to weigh-ins, and everything in-between. Plus, Anderson Silva's injury woes, examining Chael Sonnen's future as a motivational speaker, and an early look at the ESPN interview that has everyone so riled up.

- In case you missed it, the UFC 142 weigh-ins took place on Friday and MMA Nation was there with complete coverage, including details of Anthony Johnson's weight cutting debacle. Check out the video below for a replay of all the action. 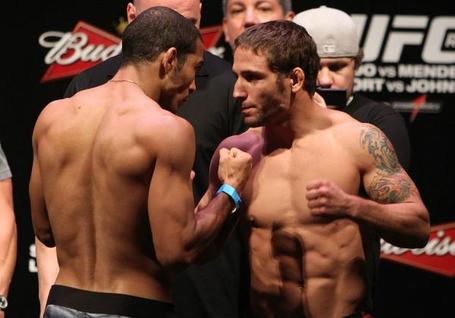 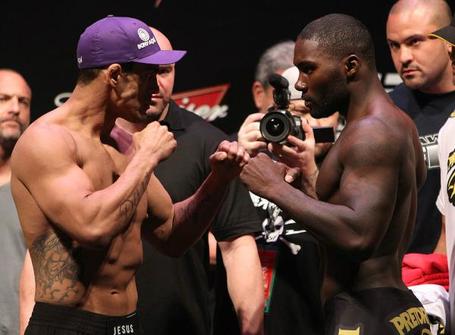 - Our intrepid Editor-in-Chief Luke Thomas has been killing it all week with his UFC 142 coverage. For your reading pleasure: Urijah Faber hyping his pal Chad Mendes, Vitor Belfort pondering if MMA will ever be as big as soccer, Junior dos Santos offering his fight night predictions, and Anthony Johnson explaining his love of eating (before ironically weighing in as a light heavyweight).

- MMA Fighting's Ben Fowlkes breaks down the nine ways to look at UFC 142.

- Dana White sits down to preview UFC 142's featherweight championship between Jose Aldo and Chad Mendes. Said White: "Hopefully you guys are going to see who the real Jose Aldo is this weekend." (via MMA Weekly)

- Dallas Winston comes back at you with another trifecta of the best previews in MMA. Today's edition: Rousimar Palhares vs. Mike Massenzio, Edson Barboza vs. Terry Etim and Vitor Belfort vs. Anthony Johnson.

- Need more? Take a trip to MMA Mania as Nostradumbass calls his shot.

- Ronda Rousey had some glowing praise for Gina Carano that you probably didn't expect to hear. "She's like brunette with short hair with a nice rack that's a good striker. I'm like a blond with long hair that's like a good grappler that has a nice ass. We were made for each other."

- Gabriel Gonzaga may be fresh out of retirement, but that doesn't mean he's washed up: "I can still compete with the best in the sport."

- Is Anderson Silva healthy? His doctor says 'yes.' He says 'no.' Who's telling the truth?

- For everything he is and isn't, Chael Sonnen could never be called a poor public speaker. Watch here as he delivers a speech about intensity to group of young athletes. (HT: Bloody Elbow)

- The retirement of Kenny Florian could come sooner than expected. Less than a month after Florian announced a return to the UFC's lightweight division, back injuries have threatened to prematurely end his career.

- Safe to say, ESPN's story on low fighter pay has become an increasingly polarizing subject as the week has gone on. The now-infamous Outside the Lines interview with Lorenzo Fertitta is scheduled for a Sunday broadcast, but in the meantime, feel free to catch the preview below.