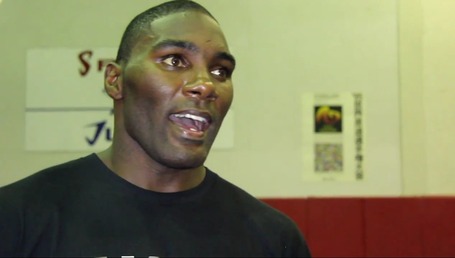 UFC President Dana White hinted earlier in the day on Twitter that there would be breaking news announced on Fuel at 4 p.m. ET, just prior to the weigh-ins for UFC 142. And what was that news? According to White, Anthony Johnson, who was attempting to make his middleweight debut, would apparently not only miss weight, he would do so 'badly'. More after the jump.

RT @fueltv: #Breaking News @RumbleJohnson has to weigh-in today & tomorrow to qualify for the fight against @vitorbelfort#UFConFUELTV

Johnson has missed weight before, most notably at UFC 104 and UFC 76. This time, however, he wasn't trying to drag himself down to 170 pounds. All he has to make for middleweight is 186 pounds. As for why he didn't make it, we don't really know.

Per White's announcement, Johnson still has to weigh in today and can't be more than 205 pounds.