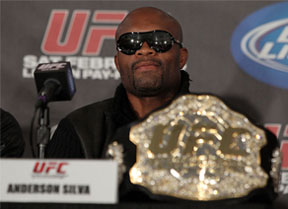 Maybe Dan Henderson was on to something?

Despite contradictory reports, UFC middleweight champion Anderson Silva recently told Brazilian outlet SporTV that he was still suffering from a pair of lingering injuries, and thus, no timetable for his return has been made.

"I'm not sure when I'll be back, I got an injury in my shoulder and another injury that just happened in my lumbar, so I'm treating myself."

Alone the statement would simply be unfortunate news for fight-starved UFC fans. Yet it was just last week that Silva's physiotherapist, Angela Cortez, issued opposing claims to Globo.

"Anderson's shoulder is doing very well. He did a great job these past months and is doing well, with the postural part being excellent. He's well, he feels no more pain and is back in training. Now he only needs to improve on his physical condition. He's 100%. I believe he'll be announcing his next fight soon enough."

So who's telling the truth in this matter?

"The Spider" fought just five months ago, so in the grand scheme of things, it's not like this has been an overtly ridiculous layoff. But if Silva's retirement is to come sooner, rather than later, as has been reported, his shaky medical status could bode poorly if Chael Sonnen can get past Mark Munoz.