Back Injury Could Signal The End Of Kenny Florian's MMA Career

Share All sharing options for: Back Injury Could Signal The End Of Kenny Florian's MMA Career 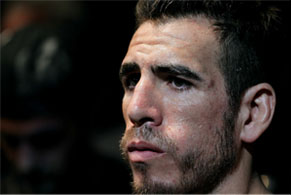 The retirement of Kenny Florian could come sooner than expected.

Less than a month after Florian announced his return to the UFC's lightweight division, a lumbar herniated disc in his lower back is threatening to prematurely end the 35-year-old's mixed martial arts career.

Florian initially revealed the injury while discussing his upcoming lightweight comeback in a mid-December interview with Bleacher Report. At the time "K-Flo" trivialized the problem, simply stating, "I have a back injury that I'm letting heal up. As soon as that's cleared, I'll start talking to the UFC about possible opponents."

Now, however, it appears the situation has taken a turn for the worse. Florian recently divulged the extent of his worries to the Boston Herald.

If the injury could be force him into retirement: "It's possible, unfortunately. I've kind of been going back-and-forth with some of the doctors, so it's possible. I'm going to see. As of right now, obviously I can't compete and train like I was at all. I'm just kind of doing what I can and hoping that things heal up and get better. I'm just kind of in a holding pattern. That's why I decided to do this commentary for the time being and take this next six months to really heal up and try to make some money on the side. It sucks. The last couple of months I've just been figuring out what's going on and what I'm going to do."

On the doctor's prognosis: "It's not good. That's why I'm trying to stay hopeful. We'll see. I've been out here in (Los Angeles) doing this show every week for ‘UFC Tonight' for Fuel TV and doing some other things. I'm just hoping that it can heal up and get better and then see if I can go back to doing what I was doing. So far, I still need to rest. If I go to do something physical, I'm just not able to do it. That pain is coming back."