Countdown To UFC 142 On The Round-Up

Share All sharing options for: Countdown To UFC 142 On The Round-Up

This morning we'll continue our preview of UFC 142 as we take a look at the entire main card, before moving on the Jon Fitch/Tyron Woodley connection and video evidence of why you should never prank Frank Mir. But first...

- The UFC 142 pre-fight press conference took place on Thursday morning, and MMA Nation was there with complete coverage, including video and notable quotes. Afterward, the four featured fighters squared off for the cameras. 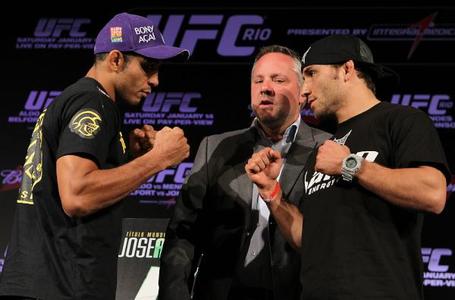 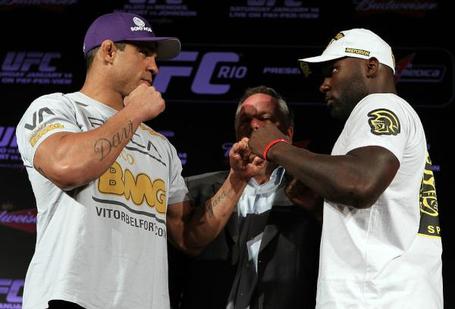 - Could MMA's popularity in Brazil ever surpass soccer? The idea seemed ludicrous as recently as five years ago, but now Vitor Belfort believes it could happen.

- Dan Henderson surprised some by turning down a fight with Antonio Rogerio Nogueira in order to stay in the title hunt. While Hendo's status may keep burgeoning contender Phil Davis from entering the discussion, the 27-year-old has no qualms about his decision: "I ain't losing. You can give it to Hendo and there will still be a belt when I get there."

- Get prepped for Saturday night's big fight with the first installment of Countdown To UFC 142.

- The guys at CompuStrike were generous enough to offer a complete statistical break down of Aldo vs. Mendes.

- Part 2 of Countdown To UFC 142 gives us a closer look at Saturday's co-main event, Vitor Belfort vs. Anthony Johnson.

- Gina Carano opened up to MMA Mania when the subject turned to Cyborg's positive steroid test. "I'd be lying if I said that I wasn't hurt by the whole thing."

- The comparisons between Jon Fitch and Tyron Woodley started flooding in right after his lackluster three-round win over Jordan Mein. Now, just like Fitch, T-Wood finds himself frustrated at Zuffa's unwillingness to give him a title shot.

- Take a look at the rest of UFC 142's main card with previews of Erick Silva vs. Carlo Prater and Mike Massenzio vs. Rousimar Palhares.

- Want to receive free ProElite tickets for life? All it takes is compromising your shame.

- After the whole UFC 140 broken arm debacle, I have no idea why anybody would try to play a prank on Frank Mir, but this guy must not have gotten the memo. (HT: Gals Guide to MMA)