Dan Henderson Explains Why He Turned Down Fight With 'Lil Nog'

Share All sharing options for: Dan Henderson Explains Why He Turned Down Fight With 'Lil Nog' 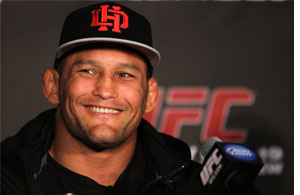 Fighters turning down fights generally elicits a negative reaction from fans, so it was somewhat surprising to hear word of the always-game Dan Henderson rejecting a meeting with Antonio Rogerio Nogueira.

But Hendo's reason is simple: he wants that title shot and he's willing to wait to get it.

In a recent interview with Clinch Gear Radio, Henderson was candid when asked to explain his decision.

"I was under the impression that [Dana White] still kind of was on the fence whether he was going to put me in front of Rashad or not, that's assuming Rashad wins. He did offer me a fight with Little Nogueira, but I didn't think the fans would be interested in that fight, and it's not as much time as I would like to prepare for a five-round fight. So I told him I would wait to see what happened with the Rashad fight. I would like to fight Jones now rather than if I took that fight with Little Nog, it wouldn't be fighting Jones until another eight-nine months.

It would have kept me active right now, but I'm okay waiting a little bit. We'll see what happens with the Rashad fight and go from there... I couldn't really get a read on it, but it was more about having the time to prepare. I did inquire to say, 'Hey, I would be interested in doing it if it was a three-round fight. I could have time to prepare for that.' But with the new rule, they didn't want to deviate from that all."