Share All sharing options for: Dana White On Lesnar: 'I Think Brock’s Done' 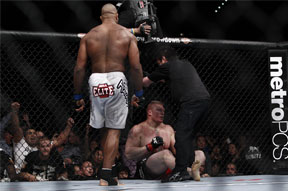 A fighter's retirement is one of the least definitive phenomenon in all of sports. Just picking from recent memory, Kurt Pellegrino was in back in the cage seven months after hanging up the gloves. B.J. Penn did him one better, lasting all of two months before the Nick Diaz callouts picked back up.

So could Brock Lesnar's retirement really just be setting up a blockbuster comeback? Dana White doesn't seem to think so.

Earlier this week the UFC President stopped by the Jim Rome Show, where he gave his take on the idea of a Lesnar revival.

"I think Brock's done. The conversations I've had with Brock Lesnar since that fight, all indications point to it's over. This isn't baseball man, half in, half out, you can go out and party the night before and then play a game. These guys have to be 100-percent into this mentally, physically, emotionally.

Here's what Brock said to me, he said ‘I'll tell you what after my surgery from diverticulitis, this last surgery I had, I have never felt so good in my life'. He said ‘I've had the best camp I've ever had, no injuries, I was in great shape, all the things that could go right, went right, that guy is just that much better than me and it's time for me to retire'."

Photo by Esther Lin via MMAFighting.com