Aldo's Kicks Vs. Mendes' Wrestling On The Round-Up

Share All sharing options for: Aldo's Kicks Vs. Mendes' Wrestling On The Round-Up

Today we'll continue to take a look at everything UFC 142: Aldo vs. Mendes has to offer, before reexamining the Cyborg-steroid reaction and Gina Carano's star turn. Let's kick things off.

- MMA Nation's Luke Thomas and Nate Wilcox continued their discussion about UFC fighters associating themselves with pro wrestlers, and this time Steven Seagal even got in the mix.

- How bizarre is it that Anthony Johnson fought at 170 pounds but looks bigger than former light heavyweight champion Rashad Evans in the latest edition of Fighter Diary? And just in case Vitor was thinking about taking this fight to the ground, Rumble has a warning for him, "I'll do spinning back kicks from the guard!"

- It's fight week, so of course that means one thing: blog week.

- Plan out your weekend with UFC 142's updated schedule of events.

- Fraser Coffeen breaks down one of Jose Aldo's greatest weapons, the leg kick, in this edition of Judo Chop.

- And just in case you forgot, here's what Faber's leg looked like after Aldo was done with it. (via @UrijahFaber) 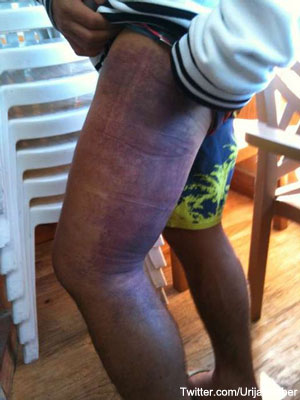 - Ronda Rousey was blunt when asked about "Cyborg" Santos' steroid suspension: "I feel like anyone with half a brain isn't surprised."

- Take an extended look at the stories behind UFC 142.

- Nick Diaz seems to have backed off the Georges St. Pierre callouts while he prepares for Carlos Condit, but that doesn't mean he couldn't weigh-in on GSP's injury-prone past. Said Diaz, "The type of exercises he does, you're injury prone. You're higher likely to hurt yourself doing explosive workout exercises."

- The guys over at UFC Undisputed 3 simulated UFC 142's main event 25 times, and surprise, surprise, Mendes won 80% of the first rounds, nailed 72% of his takedowns and dodged 47 of 48 submission attempts. So who was the ultimate winner?

- Journey back to the time when Anderson Silva was still mortal. Fresh off a stunning flying heel hook loss to Ryo Chonan at PRIDE Shockwave 2004, "The Spider" breaks down in the back room in this previously unreleased footage.

- Speaking of spectacular submissions, join Bloody Elbow's roundtable discussion as the staff makes their picks for Submission Of The Year 2011.

- "Cyborg" Santos had a simple explanation for her positive steroid test: it was in a "dietary supplement" she unwittingly took. If she's telling the truth, Bas Rutten says there's an easy way to clear her name.

@BasRuttenMMA
Bas Rutten If Cyborg wants to clear her name, simple, send the drink to the athletic commission, let them test it. I just don't believe they put it in drinks to LOSE weight. If they DO put roids in, show the drink and her name is cleared. Its what I would do. Like I said before, they all say "I took something over the counter". What? Tell us what you took? Help your fellow fighters not to make the same mistake by accident, just saying
Jan 10 via Twitter for BlackBerry®FavoriteRetweetReply

- Which leads us to this. MMA and Hollywood are entirely separate beasts, as Gina Carano found out following the release party for Haywire. If this is a bizarre look at Carano's new life, it's likely she may never return to the cage.