Rampage Jackson Has No Interest In 'Step Down' To Strikeforce, King Mo

Share All sharing options for: Rampage Jackson Has No Interest In 'Step Down' To Strikeforce, King Mo 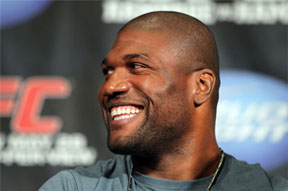 Luke Rockhold wasn't alone when he called for UFC fighters to come to Strikeforce and challenge him. Former light heavyweight champion Muhammed "King Mo" Lawal has been picking at Quinton Jackson for months, and with the barren wasteland that is Strikeforce's 205-pound roster, grabbing Rampage's attention would undoubtedly be a coup for the promotion.

Earlier this week Jackson was a guest on HDNet's "Inside MMA," and when asked about the feud, promptly dismissed King Mo before essentially saying what we're all thinking about Strikeforce's situation.

"I don't like the guy. He's a hater. He's a big time hater, you know what I'm sayin'? He's been calling me out on Twitter and stuff. He's just hatin' big time. He, uh, he told me a while ago that he wanted to fight me when I'm on my way out. When I'm over the hill. Like most fighters, we get old and the time comes to retire. He said that's when he wants to fight me, years ago. Now he's comin' at me like I'm on my way out."

And that, right there, is the problem for Strikeforce. It is a step down and everyone knows it.

While Strikeforce: Rockhold vs. Jardine was an admirable push to create new, viable stars, it ultimately sunk as the established name won each major fight. With a such a small crop of marketable fighters, who knows how Zuffa intends to avoid the endless rematches that come from a situation like the 205-pound division's Mousasi/Feijao/King Mo love triangle.