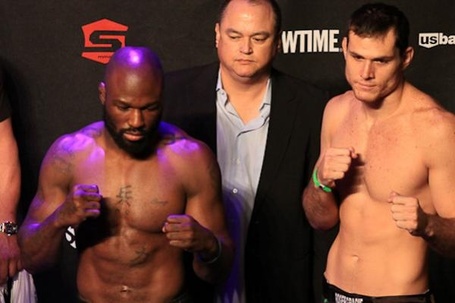 It's an old school match up of specialities when Muhammed Lawal -- an accomplished amateur wrestler on the collegiate and international circuits -- takes on Roger Gracie -- perhaps the most talented young Brazilian jiu-jitsu practitioner in mixed martial arts (MMA) today.

Lawal and Gracie are relatively new to the sport, getting their starts in 2008 and 2006, respectively. "King Mo," despite his two-year handicap, has been more active, however, competing eight times throughout his career, while Gracie has been able to record just half as many appearances.

That's because Gracie is still very active on the world jiu-jitsu circuit and runs his own gym, The Roger Gracie Academy, in London, England. Jiu-jitsu is his life. Lawal, meanwhile, has focused heavily on becoming a more well-rounded fighter, most recently joining the American Kickboxing Academy (AKA) ranks, a gym renowned for turning talented wrestlers into top MMA contenders ... and champions.

He'll need all the additional advantages he can muster, as well distance, to avoid the numerous dangerous, fight-ending positions that Gracie can put him in.

Lawal: "King Mo" made his promotional debut in late 2008 and already had six wins under his belt after 16 months after turning professional. And these weren't local cans on the regional Ohio scene. In fact, he was paired opposite Travis Wiuff, an experienced veteran with more than 60 fights to his credit at the time, in his first-ever sanctioned fight. Lawal smashed him in the first round, needing little more than two minutes to take him out. He'd ride that wave of momentum across the pacific right to the Strikeforce offices in San Jose, California. And in just his second fight for the promotion, he'd upset Gegard Mousasi to win the promotion's 205-pound title. He'd fail to defend it, losing to Rafael Cavalcante in his next appearance, but proved that he has a bright future in the sport. And he's committed to getting better, which is evident with his recent stint at AKA.

Gracie: There isn't much to say about Gracie. His last name actually says it all. He is the grandson of the legendary Carlos Gracie, the founder of Brazilian jiu-jitsu. The apple didn't fall too far from the tree with Roger. He is an absolute terror when it comes to grappling. He is "at the top of the food chain" as Joe Rogan would describe. However, rather than try and turn a quick few bucks in MMA, he chose to hone his craft and carry on the family tradition. It's the reason that this will be just his fifth fight in nearly 30 years on this planet. Gracie has never fought twice in MMA in the same year ... until now. His recent finish of Prangley, a serviceable veteran who hits hard and wrestles well, as well as Randleman, demonstrated that Gracie's superior submission skills are capable of snuffing out decent opposition.

There are no secrets in this showdown.

Lawal will likely implement an aggressive defensive plan, stalking Gracie, keeping his distance with jabs and relying on his rich wrestling pedigree to keep him off his back. If he can land a sold strike, or a combination of them, he will probably go in for the finish despite the risk.

Gracie, meanwhile, will patiently wait for Lawal to make a mistake and attempt to make him pay dearly. He doesn't need much of a slip or lapse, all Lawal has to do is make one minor misstep and Gracie can make him tap, nap or snap in record time. He can even pull guard and attempt to win off his back if so compelled.

Based on their backgrounds, this probably won't win "Fight of the Night." Their styles are similar yet wildly different. It could actually end up being a 15-minute stalemate if neither fighter is willing step out of his comfort zone.

Lawal is the stronger, more dynamic and well-rounded fighter. He can finish this fight with one well-placed punch. The problem is getting close enough to Gracie to land it without getting sucked into his dangerous world. And that's a place Lawal will want to avoid at all costs. This is very simple: Lawal via technical knockout or Gracie via submission. Both fighters are also clearly capable of winning decisions if it turns into a careful game of chess.