Anderson Silva Vs. Georges St. Pierre Might Now Be Closer Than We Think

Share All sharing options for: Anderson Silva Vs. Georges St. Pierre Might Now Be Closer Than We Think 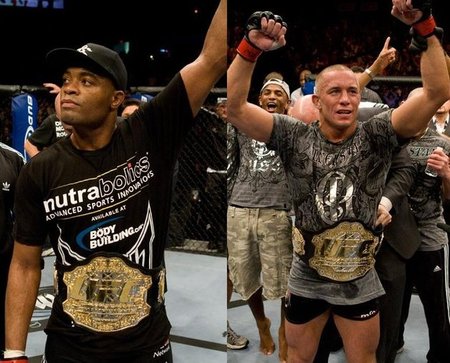 What Anderson Silva is to the middleweight division, Georges St. Pierre is to its welterweight counterpart.

"Rush" has reigned supreme since defeating Matt Hughes to win the interim 170-pound belt in Dec. 2007. He'd go on to become the undisputed kingpin of the weight class five months later with a technical knockout of Matt Serra at UFC 83 in April 2008.

He hasn't looked back since.

In fact, the Canadian phenom, 30, has run through six of the very best the division has to offer since that time, including Jon Fitch, Thiago Alves, Josh Koscheck and Jake Shields, among others. He even introduced then-lightweight champion B.J. Penn to his world at UFC 94 in 2009, which marked the first time ever that two current titleholders competed against each other inside the Octagon.

St. Pierre utterly dominated the Hawaiian so bad that the proud "Prodigy" couldn't answer the bell for the fifth and final round.

Much like Silva, the talent well of credible and noteworthy opposition to truly test St. Pierre has run dry. And with the recent UFC 137 main event reshuffle, which saw former Strikeforce champion Nick Diaz demoted and former World Extreme Cagefighting (WEC) champion Carlos Condit promoted to the main event, it has become dryer than the arid Texas terrain.

After Diaz, Condit was essentially the last man standing. Naturally, St. Pierre would have had to defeat the volatile Stockton, Calif., native and Condit would have had to topple Penn, his original opponent before the switch.

If that scenario played out it would have extended St. PIerre's future for at least one more fight and perhaps another year. But that's no longer possible, even if Diaz -- who was matched up with Penn instead on the same Oct. 29, 2011 card -- is able to win his first fight for the promotion since stopping Gleison Tibau via technical knockout at UFC 65 in Nov. 2006.

Because company president Dana White no longer "trusts" Diaz to headline a major pay-per-view (PPV) event after the recent fiasco. Some would say he is even fortunate to still have a job, much less be featured in a major co main event.

In essence, the recent developments have cut short St. Pierre's welterweight tenure. Aside from Condit, only one notable challenger, Fitch, lies in wait. And White, for whatever reason, has marginalized the number two-ranked fighter in the world, saying that Fitch has already had his chance at St. Pierre, a five-round beatdown back in 2008.

Rest assured that if St. Pierre is able to tack Condit's pelt to his welterweight wall of victims on Halloween weekend, he will have essentially done what Silva has done at 185 pounds:

Clean out an entire division.

From that point forward, there is only one way to go, which is up. And don't expect St. Pierre to work his way through the ranks to earn an eventual title shot against Silva. It will be immediate.

If Silva is not bumped up to light heavyweight ranks by that time, anyway.

Anderson Silva And The Five Men Who Should Fight Him