In Support Of Georges St. Pierre

Share All sharing options for: In Support Of Georges St. Pierre 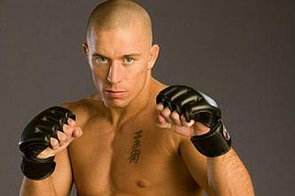 It's one thing when commenters respond negatively to an article. That's part of the game. But when my wife calls to give me hell after an article, that's when I take note. And boy, did she not care for my recent support of Nick Diaz, the reluctant press conference attendee. More specifically, she didn't care for my description of Georges St. Pierre, the welterweight champion, as a corporate fighter.

"Why would you take issue with somebody for being a good and responsible person? You threw GSP under a bus. I really took issue with your characterization of Georges. You described him in such a way that you made it sound like a terrible thing to be a professional and responsible while also being a great fighter. That should be celebrated.

"I just don't think that being a responsible employee has to be anathema to being a fighter. Plenty of guys prove you can be both. Just because our culture is devolving into a bunch of spoiled, selfish jerks doesn't mean you should push for that to happen at every turn."

So there you have it - the alternate view. And one I don't necessarily disagree with. I like GSP. He's a great guy and a class act. And that's exactly why this fight is so compelling. It's the contrast that made it special.