Fans Are The Big Losers In The Nick Diaz Fiasco

Share All sharing options for: Fans Are The Big Losers In The Nick Diaz Fiasco 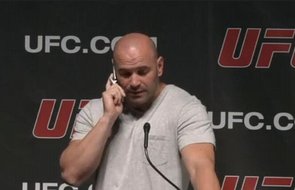 Dana White has promoted a lot of mixed martial arts fights. More than 1600 by his reckoning. He's seen it all - or thought he had. But Nick Diaz missing the press conference for his world title fight against Georges St. Pierre was something he'd never encountered. Taking a call from a fighter's manager during a press conference is equally bizarre. As you see above, White talked to Diaz's manager Cesar Gracie in front of the assembled media. It was that kind of day for the UFC President.

Diaz is out. He missed a media appearance yesterday in Toronto and failed to show today for the press conference. White said Diaz skipped three flights, at the cost of $15,000, before disappearing completely off the radar this morning.

"Maybe he's been taken away by aliens," St. Pierre joked. "...Maybe he's going to show up, walk in, and call me names. To me it doesn't make sense. I worked all my life for these opportunities. I just don't understand....His life would have changed completely."

Diaz hates doing media. That much we know. I've personally been promised interviews with Diaz, who I once called the greatest man to ever live, only to have the fighter no show at the last minute. You live with that. To borrow a phrase, that's just Diaz being Diaz.

"Who in the room is really shocked and horrified, unbelieving that this is really happening," White asked. "He snuck out the back door of Cesar Gracie's house....If I knew this was going to happen I would have never made the fight."

Diaz loves to push buttons. In Dana White, he found someone willing to push back and harder. Carlos Condit, who cried after getting the news, will fill in for Diaz. While Condit is a great fighter, the fight will be missing the edge and excitement that only Diaz can provide. I'm going to miss seeing Diaz challenge himself against St. Pierre. Condit-GSP is a good fight. Diaz against St. Pierre would have been an experience. It's unfortunate that we won't get to see it.