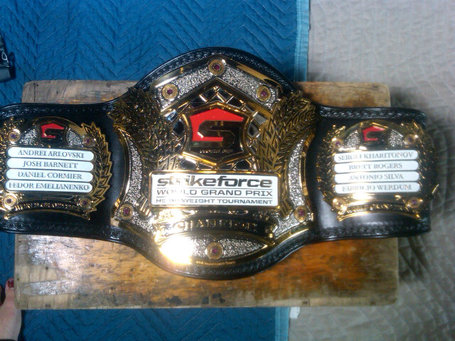 Have a gander at the belt Strikeforce has produced to award the eventual winner of the Strikeforce Heavyweight Grand Prix. You'll notice there's a name conspicuously absent from the list of eight fighters: Alistair Overeem. There's some obvious logic behind the choice. He's out of the tourney, but he was never eliminated. He's just no longer a participant. Daniel Cormier has taken his place. If there's any fan out there who wishes to express righteous indignation about the Overeem omission, I'd just offer historical accuracy here is hard to come by and messy. Best just to move along.

Larger photo after the jump.

I find very few combat sports championship belts to aesthetically pleasing. This one seems ok, not too bad. I'm curious, though, to see what others think. I find the placement of the names to be a strange plain juxtaposition against the shiny, almost garish bling. Still, the winner getting a belt is an admirable move on their part. And hey, I'd wear it if I won it.