UFC 141: The Thrill Of The Heavyweights

Share All sharing options for: UFC 141: The Thrill Of The Heavyweights 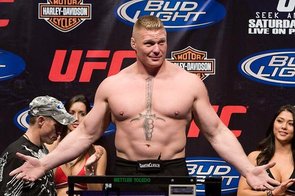 There's something special about a big heavyweight fight. While it's fun to watch little guys scamper around the cage, 500 pounds of flesh colliding has a unique appeal. Brock Lesnar and Alistair Overeem are both mammoth men. Better still, both are among the best in the world at what they do.

When they meet in the Octagon December 30th, it's going to be a throwback to the old school. Lesnar is the superior wrestler. Overeem excels in striking. Whoever imposes his will, and quickly, will be the winner. It's a fight that will likely be decided almost immediately. If Overeem can shrug off a takedown, odds are he's knocking Lesnar out. If Brock drives through a double leg, there's little chance Overeem is doing anything but looking at the ceiling lights all night.

What a great fight.