Can The UFC Succeed In Japan?

Share All sharing options for: Can The UFC Succeed In Japan? 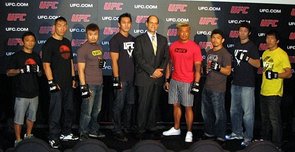 The UFC announced a return to Japan next year, part of a promised push into Asian markets. While mixed martial arts was once a mainstream phenomenon in that country, it's been years since Pride ruled the MMA world. In the years since that promotion collapsed, interest in the sport has fallen to an all time low.

Can Zuffa succeed where Japanese promoters have failed? Bloody Elbow's Leland Roling and Fight Opinion's Zach Arnold have their doubts:

UFC had a great TV deal in Brazil, ran a show in Rio featuring Brazilian fighters at the top of their game (Shogun, Anderson), and they drew big business. UFC has no network TV deal in Japan, is running a show at PRIDE’s old house, and is not booking Japanese talent that anyone can consider championship-level right now. Got it.

The UFC wants to push their brand, their own style of what combat sports is to the Japanese. Unfortunately, the whole idea that the spectacle of American entertainment can draw in a crowd is only a novelty idea. History suggests otherwise. In fact, history suggests that Americanized versions of anything have failed miserably in Japan without some tweaking to fit into the culture. The vanity act will only falsely create an idea in the UFC's head that success can happen. It won't last.