Share All sharing options for: 'King Mo' Says What We're All Thinking 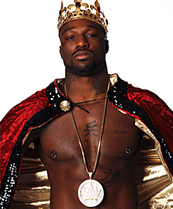 Seven months after being purchased by the UFC's parent company, Zuffa LLC, Strikeforce has gradually become a shell of its former self.

As a slew of contenders and past champions leave its ranks for greener pastures -- including big names like Fedor Emelianenko, Alistair Overeem, Jake Shields, Jason Miller, Dan Henderson, and Nick Diaz -- fans have begun to question the promotion's intentions for the future. Over the weekend former light heavyweight champion Muhammed "King Mo" Lawal joined those ranks.

"If I'm going to fight for the belt, I want to fight the champ, and that's Dan [Henderson]," said Lawal. "The thing is, what's the point? What's the point of having the belt when it's been vacated, and the person who vacated it is still fighting somewhere else within the same umbrella, but not the same organization?"

Surprisingly candid words from one of the organization's most marketable remaining contenders.

However, that wouldn't be the end of it. Lawal continued on with this train of thought, explaining how the perception of Strikeforce has changed amongst his contemporaries since the beginning of the year.

"It feels a little weird, because it's not the same," Lawal said. "It's like a cancer patient, like a dying cancer patient. That's how I feel like the organization is. We're just waiting for it to die, to pass. As long as I can get my fights in and they're still around, I want to get them in."

Lawal's sentiment, while dramatic, isn't too far off the public perception. Over the last few months two of the promotion's championship belts have been vacated by fighters seeking a reentry into the UFC, with the third being lost alongside the exile of Alistair Overeem, who may wind up in the UFC anyway.

Where Strikeforce goes from here is anyone's guess, but Lawal's open discontent surely isn't doing the organization's image any favors.