Share All sharing options for: Josh Koscheck Gets His Wish, Fights Matt Hughes Two Years After Original Call Out 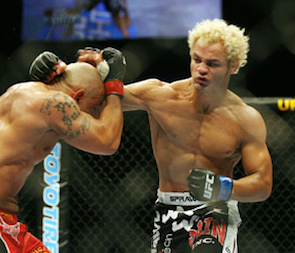 Good things come to those who wait.

Former number one welterweight contender Josh Koscheck today had his wish granted to fight Matt Hughes, almost exactly two years after he publicly called out the former champion in his post-fight UFC 103: "Franklin vs. Belfort" interview.

Shortly after finishing Frank Trigg via first round technical knockout in Sept. 2009, "Kos" had this to say about the Hall of Fame inductee:

"I know there's a guy who just signed a new contract, and his name is Matt Hughes. I've been asking for that one for a long time ... but I'll fight anyone, anytime, anyplace."

Hughes was puzzled when he heard the American Kickboxing Academy (AKA) standout's remarks, referring to him as just a "kid" who should be focused on fighting the division champion rather than himself. He even went as far as to say that he had "no interest" in fighting Koscheck.

It seems as though Hughes might not have a choice now that Diego Sanchez, Hughes' original opponent for UFC 135, has been forced to withdraw from the 170-pound contest because of a broken hand. Koscheck has already agreed to the bout, which takes place at the Pepsi Center in Denver, Colo., on Sept. 24, 2011.

That's just three of preparation for Koscheck -- who has been out of action for nearly 10 months -- to show Hughes, 37, how kids can fight.

Careful what you wish for?