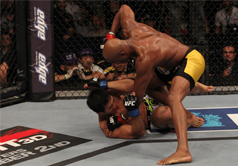 For anyone that witnessed Anderson Silva's thorough deconstruction of Yushin Okami at the main event of UFC 134, it could come as a shock to hear that the pound-for-pound king was actually fighting at anything less than 100 percent. Yet according to a recent interview with Brazilian MMA outlet Veja, that was the surprising reality.

-Did you fight 100%?
Actually I did not. A month prior to the fight, I hurt my shoulder sparing with Junior Cigano, and I went to Rio feeling pain. I had to take anti-inflammatory and clear the medication I took with the Commission.

-How severe was the injury?
I spoke with my doctors a lot. I had an MRI done right after I started feeling pain in the shoulders and the doctors cleared me, they said it was nothing too serious. It was a small injury, I think it was the muscles in the rotator cuffs, but it bothered me, I will be taking some time off to let it heal.

In the interview Silva also discussed his bizarre hands-down stance, a common point of contention that has slowly developed into one his trademarks.

-Why do you drop your guard when you think the fight is going well?
Sometimes people think I'm being authoritarian when doing that. But there are strikes that cannot be 'read' if the hands are at the waist. Training with the hands at the waist increases reflexes and gives more velocity to strikes. It's harder for your opponent to read you if your hands are at the waist. That's why I was able to drop Yushin in the first round. If I were to have my guard up he would be able to defend. It's a style that confuses the opponent. Always in the beginning of the fight I try to look for the 'secure spot' where I am able to drop my guard, but not be subjected to receiving strikes.