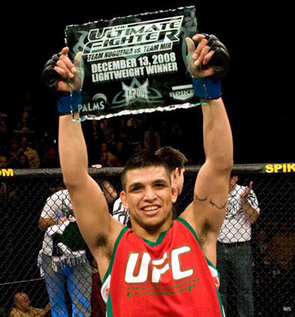 Efrain Escudero, a former Ultimate Fighter winner, lost to Charles Oliveira last September. To make matters worse, he missed weight and was cut from the promotion. Since that learning experience, Escudero has gone 4-1 and has his sights set on the Octagon. MMA Mania's Brian Hemminger caught up with Escudero to talk about his fight for BAMMA later this month:

Brian Hemminger (MMAmania.com): I wanted to talk about your training over at MMA Lab a bit. You've been working with John Crouch for a very long time and you've also got Ben Henderson over there. With his win over Jim Miller, he just vaulted near the top of the UFC lightweight division. Can you talk about training alongside Ben and whether or not his intensity is infectious with the rest of you guys?

Efrain Escudero: He's working really good. Me and him train right alongside each other. He was doing his training camp for Miller and I was doing my training camp. We were doing the same conditioning. I just fought a month ago in Miami, Florida against Mike Rios and me and him shared the same camp. Now I've got my fight coming up and he's been in there helping me. The mentality of our team is we're not selfish, we don't just think, "Me, me, me," we try to help each other out and push each other. When we feed off each other and each other's momentum, that's really good. Also, when I roll around in grappling, tapping Ben Henderson is really good, him tapping me. We go in there and give everything we have.

Brian Hemminger (MMAmania.com): That's gotta be a good feather in your cap, tapping Ben Henderson in training because he's got that reputation now of being unsubmittable.

Efrain Escudero: It's funny, you know? I'd rather get tapped 1000 times in practice than get tapped once in the Octagon, though.