Carlos Newton was cocky. There's no other way to describe him. And why not? He had just taken the welterweight title from Pat Miletich and he was riding high as the best 170 pound fighter in the world. Newton had it all - good looks, charisma, and brains. He could fight a little bit to, combining excellent judo throws, solid striking, and superlative submissions.

The champion enjoyed the new look UFC. The Zuffa team was trying to upgrade the fighter entrances and Newton was 100 percent on board. He came out for the fight with models, sunglasses, and an afro wig, dancing to "Bootylicious." Waiting in the cage, Matt Hughes was not amused. For Matt, the fight was a little bit personal. Newton had not only beaten his mentor Miletich, but he had all but dismissed Hughes as a viable challenge during the prefight press circuit. The challenger had something he wanted to prove.

The first round featured some pretty good back and forth action. In the second, things really started to get interesting. I wrote about the fight earlier this year at MMA Nation:

Hughes opened the stanza with a giant takedown, but Newton was able to weather it and lock on a tight triangle choke. Hughes stood to his feet, hoping the threat of a slam and the power of gravity would make Newton let go of his hold. But the Canadian was persistent. Hughes felt consciousness begin to fade as he pulverized Newton with a powerbomb fans could feel all the way through their televisions.

No one seemed to know exactly what was going on. Newton was out cold, but Hughes was sitting still with a glazed look on his face. While referee "big" John McCarthy was checking on Newton and calling off the fight when he saw the submission specialist was clearly unconscious, Matt's teammates were trying desperately to get him to wake up. He was dazed and confused - teammate Jeremy Horn had to tell him that he had won the fight. Then the celebration began.

Hughes: I don't think I was out.  I was dazed.  In the first round I was winning pretty handily, I think all the judges had me winning the round.  In the second I came out and took him down and he slapped me in a triangle.  To get out of the triangle I lifted him up and he tightened the triangle up even more.  Now the triangle's starting to get to me a little bit and I can feel pressure on my neck.  So I take a step back and slam him down.  The triangle was hurting me so bad it took me probably two seconds to know what was going on.  After I slammed him down.  It was a couple of seconds before I realized he was unconscious.  By no means was I l knocked out I was just groggy from him having a chokehold on me.  Me hitting the floor and slamming him had nothing to do with the triangle.  I jumped up and ran around for a little while.  When I got done running around  he was still laying on the ground.  He was hurting.

Carlos Newton: I won that fight. I know I did.  Because Matt told me, pretty much, ‘Yeah, I was out.’  He made it pretty clear to me that he thought it was a lucky break. That fight was a great fight and it’s shows why this sport is so appealing.  It’s so unpredictable. You have to consider so many variables. At the end of the day, when a guy really does dominate in this sport, he isn’t just the better man.  He’s the guy that has the wind to his back, making it happen.

Excerpt from The MMA Encyclopedia 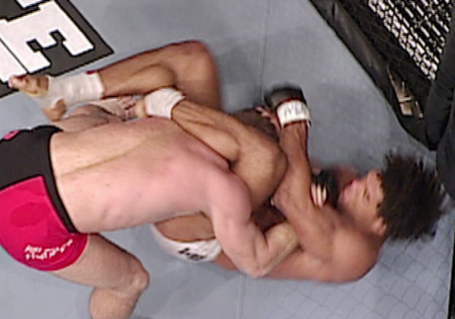