Things weren't going well for Matt Hughes in his rematch with Frank Trigg at UFC 52. Hughes had been hit in either the cup or the bladder by a Trigg knee (where the blow landed depends on which man is telling the story). A followup left hand put him on the canvas. Even Hughes admits he was briefly unconscious. He awoke with Trigg in the mount, asking referee Mario Yamasaki to stop the fight.

Hughes didn't panic. He got angry. Really angry. He hadn't wanted this fight in the first place. For the first time he had questioned a fight UFC President Dana White asked him to take. He didn't want a second Trigg fight. He had won the first so memorably, he questioned what the possible benefit could be. And then Trigg had the nerve to hit him low, fighting on like it had never happened.

An angry Hughes was a dangerous Hughes. He escaped a rear naked choke attempt, picked Trigg up on his shoulders, and ran across the cage to slam his opponent on the ground. Literally ran. From the brink of defeat to amazing action in the blink of an eye - only Matt Hughes could conceive of it, let alone pull it off.  Huge elbows bloodied Trigg and a rear naked choke finished the fight.

Dana White called it the best fight in UFC history. Who are we to disagree? 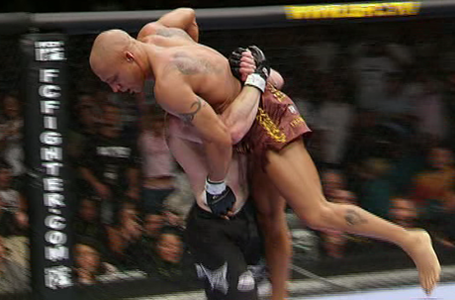