Share All sharing options for: UFC 63: Matt Hughes Gets Revenge On B.J. Penn

When Hughes fought B.J. Penn at UFC 63 it was an opportunity for redemption. The former lightweight star had shocked Hughes and the world by choking the champion out at UFC 46. Hughes, who had seen Penn struggle with his smaller teammate Jens Pulver, hadn't taken that fight seriously, barely bothering to train at all. This time would be different. At UFC 63, it was time for payback.

In the first round Penn was on fire, avoiding the takedown with a head shaking display of flexibility and skill and landing power punches that shook Hughes. "I remember thinking, I wish his hips turned like a regular person's," Hughes said. "His flexibility was crazy and made it hard to put him where I wanted him."

In the second round Hughes finally got the top position he craved, taking Penn down and smothering him. But an ill fated elbow attempt left him over extended. Penn swiftly escaped and took Matt's back. Unbelievably, it appeared the second fight might end just as the first had - with Penn locking in a rear naked choke. Instead, with 30 seconds left, Penn secured a triangle/armbar combination.

Hughes survived the round and was surprisingly heartened as he sat on his stool. "He couldn't even walk back to his corner," someone screamed in Matt's entourage. The third  round it was a different story all together. Penn was exhausted and Hughes picked him apart, trapping him in a crucifix and forcing "Big" John McCarthy to stop the fight.

It was a bravura performance, a display of heart and will. Penn had won the first two rounds, but Hughes had prepared himself for five. That made all the difference. Penn was carried to his locker room in the back, eventually taken to the hospital for a broken rib. "You are the greatest champion of all time," Dana White told Hughes in the cage that night. It was a sentiment shared by many. 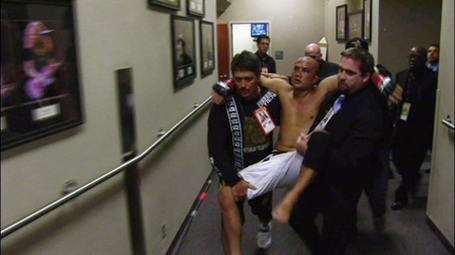