Ten years after helping his brother Rorion Gracie establish the sport of mixed martial arts in America, the legendary Royce Gracie was making a return to the UFC Octagon for the first time since going to a draw with Ken Shamrock at UFC 5. Bringing Gracie back into the fold was part of a strategy by UFC President Dana White to create new stars on the backs of the legends who built the sport in the early 1990's. It was a strategy that made Tito Ortiz a megawatt star, but it was one with a limited shelf life. There were only so many UFC legends to bring back to face the stars of today. None, of course, were bigger than Gracie, the sport's godfather, undefeated in any legitimate bout in the cage.

Say, what you will about Gracie, a man who dominated the early MMA scene with superlative jiu jitsu, but you can never question his courage. Gracie could have asked for any number of fights, searched for an opponent best suited for his ground dominance. That never crossed Gracie's mind. He wanted to fight the best. And the consensus best fighter in the UFC was welterweight champion Matt Hughes.

Hughes was a top fighter, but his ability to attract an audience hadn't caught up to his in ring prowess. Fights headlined by Hughes were routinely pay per view duds. The UFC was looking to change that, hyping Hughes on the second season of The Ultimate Fighter, and then giving him the dream match with Gracie.

It was perhaps the best promoted fight in the sport's history to that point. The two were both calm and serious in their pre-fight interviews, but I remember getting chills when Gracie announced "This is my house. I built this." Gracie talked a good enough game that Hughes was only a -300 favorite at the sports books in Las Vegas. Despite struggles in Pride, the UFC's marketing team had convinced many fans that the legend could beat Hughes.

Once the bout began, that suddenly seemed a ludicrous proposition. Hughes didn't just beat Gracie - he annihilated him. I remember him telling me how intimidated he was, scared that Gracie would submit him on the ground. But soon enough, he realized he was the stronger man there, and out grappled the jiu jitsu legend.

It was a stunning performance, in more ways than one. UFC 60 became the best selling pay per view in UFC history. Matt Hughes was now more than a tremendous fighter. He was a bonafide star. 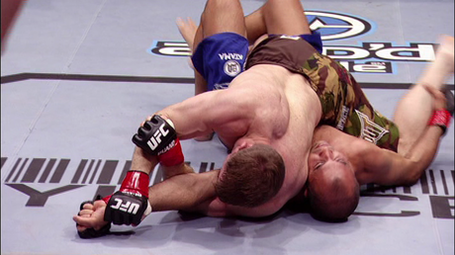