Share All sharing options for: UFC 36: Matt Hughes Wins One For America

Matt Hughes was the UFC champion after beating Carlos Newton with a preposterous slam at UFC 34. That didn't necessarily make him the best fighter in the world in his weight class. Many thought that honor belonged to Hayato "Mach" Sakurai, a Japanese sensation who had won the Shooto title and who had gone undefeated in his first 20 fights before losing a decision to Anderson Silva.

One thing was clear - Silva, Sakurai, and Hughes were the three best guys in the division. And with Silva locked into a contract with Pride and moving to 185 pounds, it was up to Hughes and Sakurai to determine which side of the Pacific had the top welterweight.

Once Hughes strolled into the cage, bumping Kid Rock's "American Badass," the question was answered quickly. He dominated Sakurai with his wrestling, tossing him around the cage, occasionally picking the Japanese star up over his shoulders like a sack of grain, depositing him wherever he saw fit. When referee "Big" John McCarthy stopped the fight in the fourth round, with Hughes in the mount, he had definitively established the UFC title as the top welterweight title in the world. 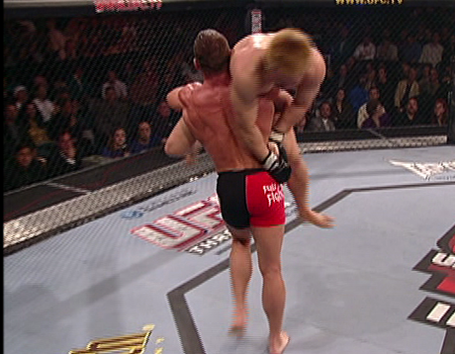