The MMA world was shocked at UFC 46 when Matt Hughes lost his welterweight title to B.J. Penn. Everyone knew Penn was an extremely talented fighter - but size matters and Hughes expected to overpower the Hawaiian jiu jitsu ace. Instead, Penn controlled the action on the ground, choking Hughes out and winning the title that had eluded him at lightweight.

It would be years before Hughes had an opportunity to redeem himself. Penn left the UFC in the midst of a contract dispute and the welterweight title sat vacant. The UFC called on Hughes and rising Canadian star Georges St. Pierre to fight for the championship of the world, a call Matt was all too happy to answer.

St. Pierre was overwhelmed by the experience. He had idolized Hughes; fighting him seemed like something out of a dream. Or, more fittingly, a nightmare. St. Pierre told me he lost the bout before the first blow was ever struck, unable mentally to step up to the moment.

That didn't stop the next great welterweight from putting on a heck of a show. His potential was obvious, as he not only dwarfed Hughes, he also overpowered him during several takedown attempts, something that had never happened to the champion. St. Pierre landed a hard spinning back kick to the chest and was likely on his way to winning the first round when disaster struck.

St. Pierre, on his back after a Hughes takedown, attempted to reverse position using his favored Kimura hold. He had done this earlier in the fight to get back to his feet. This time Hughes was ready, locking on a perfect armbar to counter St. Pierre's hold. It was text book jiu jitsu and another signature win in a stellar career. 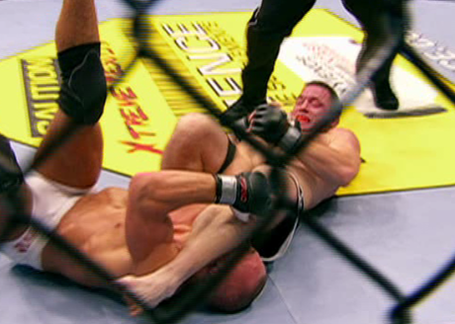