The tension between Matt Hughes and Matt Serra was a product of The Ultimate Fighter reality show. As such, it was a weird amalgamation of real and fake. Some of the drama was Serra's creation. He learned quickly how to use the cameras to his advantage and worked hard to build a feud with Hughes. But despite the manufactured nature of this showdown, there was some truth underlying the brash trash talk. The two didn't like each other - on television or in real life. Hughes thought Serra was too loud, talking more than his credentials should allow. Serra thought Hughes was a bully and, in his words, a d*ick. If the war of words started in a television production room, it soon took on a life of its own.

It was a match made in heaven for the creative team behind the famed reality show. Hughes was the walking representation of red state America. Serra was his polar opposite, a brash New Yorker, a big mouth from the big city. The two exchanged words, insults, and pointed looks -but never punches or submissions. That would have to wait for the Octagon. And wait it did. And wait. And wait.

Twenty months after they started The Ultimate Fighter, the two finally met in the cage. The feelings were still close to the surface and it didn't take long for fans to rekindle their enthusiasm for the fight. The battle was closer than many expected. Serra stunned Hughes early to take the first round. Hughes won the second round on all score cards. The third and deciding round also went to Hughes, despite a valiant effort from Serra, including an incredible takedown that had Hughes reeling.

In the end, Hughes and Serra hugged it out. Their confrontation in the cage had cooled any hard feelings. They said what they wanted to say, then duked it out to settle their differences. Hughes may have had his hand raised, but both men walked out of the Octagon winners. 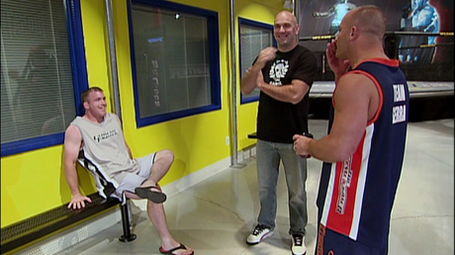