Frank Trigg made a major mistake. Not in his UFC 45 fight with Matt Hughes, although a mental error cost him in the cage as well. The real error in judgment happened before the bout. Trigg let his mouth get the best of him, taking his trash talk to new levels. The result was something that had rarely been seen in the UFC Octagon: an angry and motivated Matt Hughes.

Hughes trained for the Trigg fight for two whole months, working hard with Pat Miletich and Jeremy Horn on his ground game and importing Greco Roman wrestling expert Marc Fiore, who knew Trigg's wrestling game well. With a full camp behind him, Hughes choked out a game Trigg, a victory he still recalls with a smirk to this day.

"Some of what he said was pretty uncalled for. It was a complete lack of respect," Hughes said after the fight. "...I've got no remorse over what happened out there. I'm glad things ended the way they did. I just wish I could have choked him unconscious to be honest." 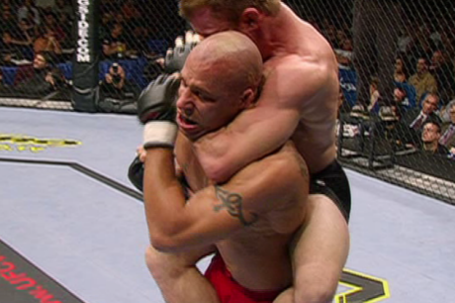