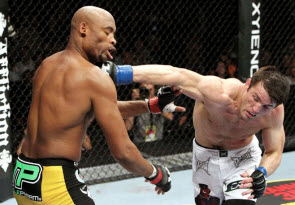 Paul Lazenby has a new comment from UFC middleweight Chael Sonnen regarding the champ Anderson Silva:

More from Sonnen after the jump.

"I have never personally had to deal with his sort of condition, but I feel for him and I really want to see what his top fighting form actually is, since we apparently haven't seen it yet. I can't remember the last time that he didn't say he was hurt for a match, and it's starting to alienate the fight fans. So he should take care of himself when he's suffering, or else the public will be stuck with the same unengaging fights and lackluster victories until he either dies or finally hits menopause."

Silva came back to beat Sonnen at UFC 117 after Sonnen dominated him for 4 and 1/2 rounds. Sonnen fights Brian Stann at UFC 136 and hopes to earn a second title shot.