Share All sharing options for: Quinton Jackson Tapped To Jon Jones At UFC 135 Because He Doesn't Trust People 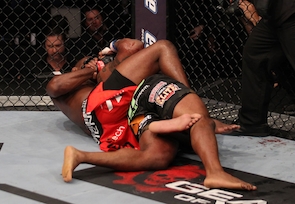 Several fighters in mixed martial arts (MMA) today, especially Brazilians, feel that it is dishonorable to tap to submissions. In an extreme example, Renzo Gracie dubbed his arm-snapping loss to Kazushi Sakuraba as among the greatest life lessons he has ever learned.

In fact, Gracie admits that had he surrendered that night in Japan it would have likely tormented him forever.

Quinton Jackson, who tapped rather than napped last night to a Jon Jones rear naked choke in the UFC 135 main event, does not subscribe to such a "foolish" fighting philosophy.

"I'm impressed with how easily [Jon Jones] executed the rear naked choke. All you've got to do at this level is make one little mistake. I was protecting my eye and I made one little mistake. I didn't think he could get me or submit me. I felt it was tight when I was trying to get out. I felt, you know, when you're about to go to sleep. And I don't let nobody put me to sleep. I don't do that. I don't trust people. I wasn't going to let him put me to sleep so I went ahead and gave it up to him."

"Bones" locked in the fight-ending hold little more than a minute into the fourth round, leaving way too much time for Jackson to be rescued by the bell.

It was an unfamiliar situation for "Rampage," who has only had to make that split-second decision one other time in 41 professional MMA bouts. In addition to Jones, Jackson apparently didn't trust the aforementioned Sakuraba, relenting to the same submission more than a decade ago.

Who can blame him? He didn't have to make a trip to the hospital back then, either.