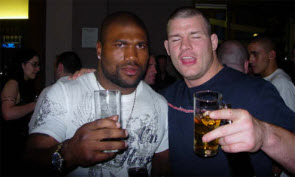 Michael Bisping and Jason Miller don't agree on much. The two opposing Ultimate Fighter coaches will settle their differences in the Octagon soon enough. But one thing they can agree on? Fans better not be quick to dismiss Rampage Jackson's chances against Jon Jones tomorrow at UFC 135.

"If anything, I think Rampage has gotten more developed as a boxer," Miller told MMA Nation. "His hands weren't quite as developed when he was younger. He was more just throwing bungalos but now he's like, everything's crisp and whatnot. I think Jon Jones better not sleep on Rampage or he's gonna get slept."

Bisping, for once, agrees.

"For this fight, trust me, I know the guys that (Rampage) has been training with and I know he's been knocking them out cold and I know that these are good guys," Bisping told MMA Nation's Luke Thomas. "He's had a tremendous camp, he's in shape and I think because of what Jon Jones said at the press conference, he's underestimating him a little bit and anyone who underestimates Rampage is a fool."

While both men agree Jones is an amazing talent, they think Jackson is the proven commodity. Bisping believes that Jackson will have a particular advantage if the fight goes several rounds. Jones has struggled the few times his fights have gone more than a few minutes. Lack of cardio, Bisping believes, may be the difference if the fight hits the championship rounds.

"(Rampage's) cardio is off the chain at the moment," the middleweight contender said. "Honestly, his cardio right now is ridiculous. He's a cardio machine. We'll see how Jones is but cardio is not going to be a factor (for Rampage), believe you me."