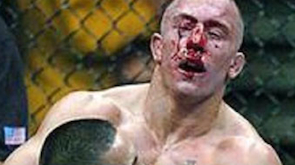 In fact, according to UFC President Dana White, it's not even close.

Welterweight champion Georges St. Pierre holds that distinguished title, despite nearly a 100-pound size disadvantage and a recent "risk averse" approach to dominating the 170-pound division that has drawn the ire of several critics.

Apparently, fans are still more than willing to open their wallets to watch the electrifying Canadian perform inside Octagon more than any other fighter competing in the sport today.

St. Pierre, who shared the epic UFC 100 card with Lesnar as the co-headliner, which grossed a record-setting 1.6 million PPV buys, has consistently seen his name lit up atop the marquee for more than four years. He most recently headlined UFC 129 earlier this year, defending his crown against Jake Shields before a rabid crowd in Toronto.

However, it marked his fifth decision win in six fights, a span that dates back to 2008.

"Rush" will attempt to snap that streak, as well as silence the critics, when he takes on Carlos Condit in the UFC 137 main event on Oct. 29, 2011, in Las Vegas, Nevada. To hear White tell it, even if he records another decision, a ton of fans are likely going to collectively pay the UFC a lot of money to watch it regardless.

And his next fight. And the one after that. By far.